During the last week of February, a group of students from Aquinas and Emmanuel took part in a retreat at the Kintbury retreat house. Along with students from St Charles 6thform, they spent 3 days examining who they were as a person, searching deep their own relationship with God surrounded by the beautifully picturesque Berkshire countryside. Hosted and facilitated by the excellent Kintbury volunteers, the students had a truly fantastic experience. As one attendee said

“I think it was amazing. It was a chance to relax and take a break from your life outside of the retreat. It gave me an opportunity to make friends and meet amazing people.“ 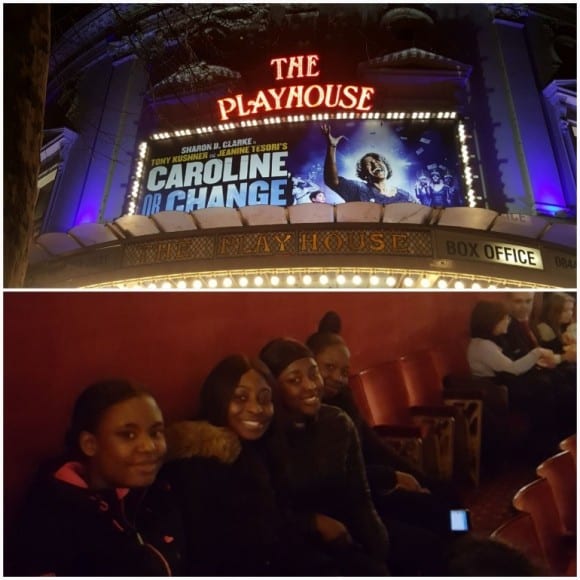 Last Thursday a group of CTK English Literature students went to see Tony Kushner’s musical masterpiece ‘Caroline, Or Change’.  It tells the story of Caroline, a black maid struggling to provide for her family on her wage of $30.

She has developed a hardened persona due to the adversities she has faced and this is reflected in the refrain that runs throughout the show ‘and I am mean, and I am tough, but $30 ain’t enough.’  Caroline works long hours in the basement tending to the needs of a wealthy Jewish household and, despite her hard exterior, the young boy in the family befriends her.  Taking pity on Caroline, he leaves loose change in his pockets in the hope that she will take it to enable her to look after her family.  This poses a dilemma for the protagonist, what is more important: her pride or feeding her children?

Our students were engrossed in the production and it really enabled them to see how to analyse plays in performance (which is a requirement of component 1 of their A Level).  The motif of change running through the play was intriguing: the literal change left in the boy’s pockets and the rapid societal change that was happening in 1960s America, which was causing Caroline to feel left behind.  Indeed, A Level English Literature student Funmi found the context fascinating, she said the musical: ‘gave [her] an insight into the lives of people of different races and how the death of John F. Kennedy affected people in America at the time’.  Another student Natasha really focused on the staging and she said the director used ‘clever stage positioning to show the class differences between the characters.’

Nadirah commented that the show was ‘vibrant and highly enjoyable’ and whilst the subject matter was serious, there were also moments of humour.  This was largely down to the magical realism of the piece; the singing washing machine in particular was an excellent vehicle for providing a commentary on Caroline’s life and internal thoughts.  It was great to catch ‘Caroline, Or Change’ at the end of its West End run and we are already looking forward to our next theatre trip!